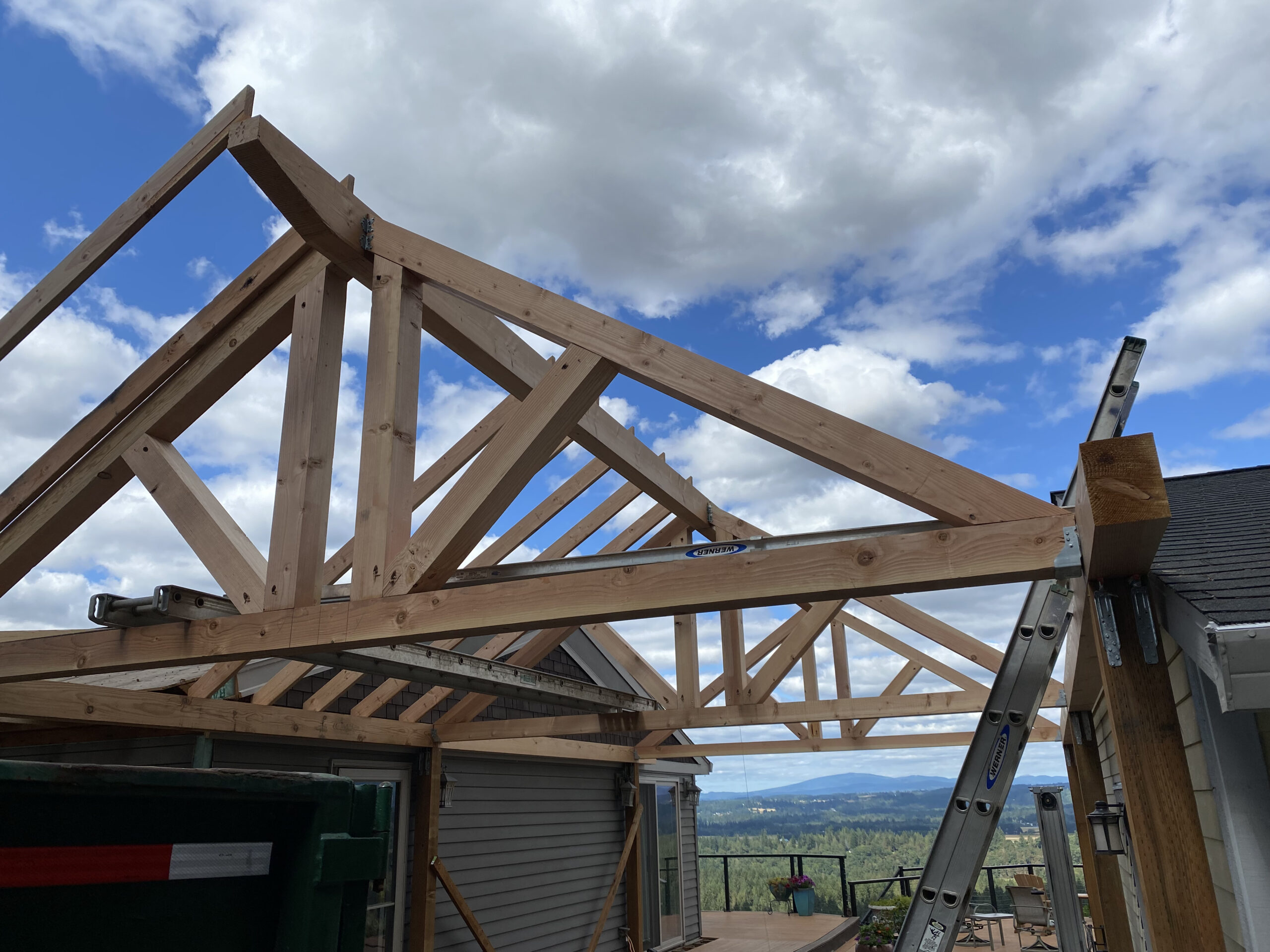 Too often, you look at a home addition and think, “Yeah. That’s definitely an addition.” Something about it doesn’t quite seem to match with the rest of the house. Chances are, if you’re the kind of person who cringes at this sort of thing (and you’re definitely not alone), then the idea of adding on to your home might make you a bit uncomfortable. What if the design of your addition doesn’t match your home?

At Lamont Bros., we’ve worked with homeowners to address these concerns and design additions that fit right into the home. If you want to know how to design an addition so that it looks like it’s always been part of the house, then you’ve come to the right place.

By the time you reach the end of this page, you’ll have a better understanding of how to match an addition’s exterior and interior to your house, so you can pull into your driveway completely cringe-free and admire your new addition!

Matching an addition to your home’s exterior

When you look at your home from the outside, you want the exterior to be one cohesive structure. Several factors affect the way an addition fits into an existing home, including the roofline, proportion, window position, and finishes.

The roof is one of the first features of a home that should be considered when designing an addition. If the roof doesn’t tie into the home in a way that looks natural, the addition will draw too much attention.

Here’s why – most homes have multiple roof planes, so it is important to connect any addition to the roof in a way that either extends an existing roof plane or builds out from it. You should also make sure that the roof’s pitch angle remains consistent throughout the home.

If the addition extends away from the existing roof plane, It is also important that the eaves align. Eaves are the span of the roof that hangs out past the exterior walls. If they do not connect seamlessly where the addition’s roof meets the main structure, even the untrained eye will recognize that something is amiss.

Have you ever seen a home addition that just looks like a massive blob on the side of a house? If so, then you understand how proportions can work against you in a remodel.

You can, however, add a 2nd story to the top of a one-story home.

The window layout of a home usually follows a pattern. Often, either one or two windows are centered on the wall of each room.

Windows do not need to be placed symmetrically. Their placement on the facade of the home should, however, follow consistent grid lines. From the exterior, windows’ centers almost always align horizontally, while they can be aligned by their sill or by their centers vertically.

When adding on to a home, you should make sure to maintain continuity with your window placement, both by following the same grid lines established by the home and by mimicking the same placement pattern that the original windows use.

Of course, the efforts that go into everything mentioned above would be all for naught if the finish work doesn’t match. This can include everything from paint color to window casings and shutters.

The thing about finish work is that it can make or break an addition, even after all of the structural and design work that goes into an addition. If you want your addition to match your home, then you have to let your home choose the finishes for you. Siding, trim, and even gutters should match as closely as possible to what already exists on the home.

One important thing to remember is that the old home is, well, old. Therefore, a new addition is naturally going to look more fresh, even if everything else matches. Unless you re-roof and re-paint the whole house, your old shingles and siding will be noticeably more weathered.

Unfortunately, there is really no way to “distress” the finishes on an addition to make it look as old as the house, but you can try to spruce up the older parts.

Matching the interior of an addition

Making the interior of an addition match the home can be tricky, as well. If you want visitors to enter your home and believe your addition has been part of the house all along, it’s going to take even more work.

One of the keys to a seamless transition from original interior to addition is a level floor. Sound easy enough, right? The challenge is that you’re building on top of an entirely new foundation.  So, it takes a lot of planning and adjustments to get the new floor to meet the old floor at the same level.

Once the floors are level, you then have to go about matching your current flooring to the new stuff. If you have hardwood floors, a good installer should be able to lace in new flooring and color match it easily.

If however, you have a laminate floor, vinyl plank, or engineered hardwood floor that has been discontinued by the manufacturer, you may be out of luck. At this point, you’ll either have to re-floor your whole house or simply install a transition strip from old floor to new.

Depending on where the transition walls meet in an addition, you may also need to re-do some drywall to avoid an obvious seam. Not only does this require pulling out some of the drywall from your existing home, but it also means getting the wall and ceiling textures to match from one edge to the other.

Again, when it comes to integrating an addition into your home, the devil is in the details. Finding a paint color that matches your walls is one thing. Baseboard, door styles, and trim may be more of a challenge, depending on the age and style of the home.

As you already know, an addition should match the style and structure of the home it is going on. So how does architectural style affect the design of an addition?

For one thing, adding on to a home that has a clearly defined architectural style adds significant limitations to what is and is not possible without breaking from tradition. Rules for roof design, window placement, and structural components play a heavy role in defining styles such as Victorian, Cape Cod, Midcentury, or Colonial.

Fortunately, a strong majority of homes today fall into what is considered “transitional style,” which is a blend of modern and traditional influences. Homes in the transitional category tend to have less rigid architectural guidelines. This makes it much easier to find a balance between what the homeowner wants for their addition and what will look good with the home.

Do you want help designing an addition for your home?

So, what do you do next? If you’re considering adding on to your home, you should now have a better idea of how a new addition can enhance your home’s appearance as well as its function. Now that you understand the dos and don’ts of designing an addition, check out some of the additions we’ve designed to start gathering inspiration for your own project.

If you’d like to speak with a professional home design consultant about getting started with a design for your addition, schedule a call with us using the button below, and we’ll contact you by the end of the day.