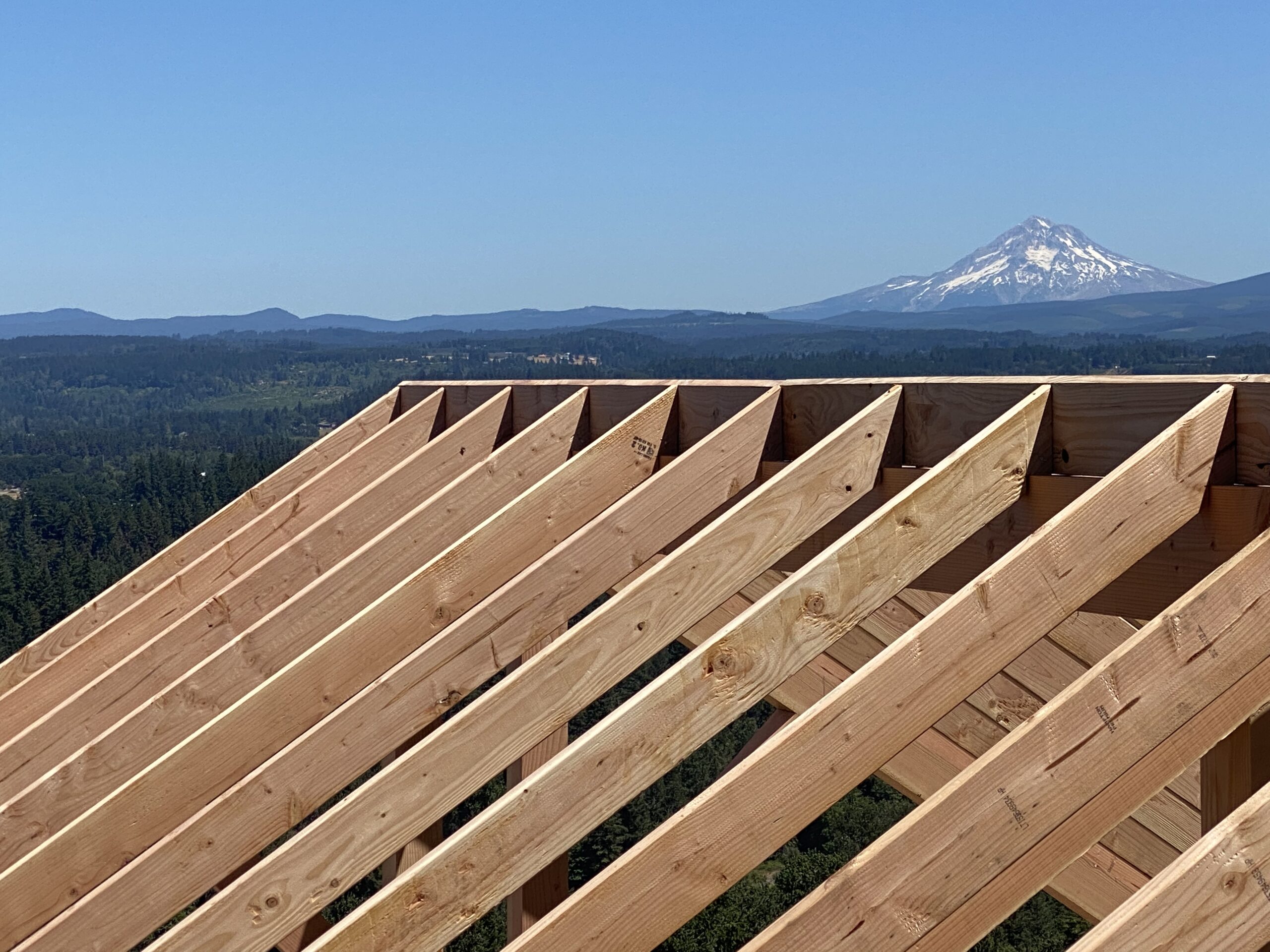 If you’ve been around construction workers in the last year, you’ve probably heard one of them mention “advanced framing techniques.” This form of structural framing is a specialized set of methods that increases the overall efficiency of a home.

At Lamont Bros., several members of our staff are trained on how to incorporate advanced framing techniques into a remodel. This skill has become especially necessary since the lumber crisis earlier this year; advanced framing allows for more efficient use of lumber.

This article will explain several advanced framing techniques and the benefits of each.  We will discuss how they can help you both save money on lumber and make your home more energy-efficient.

What is the purpose of framing?

Framing has two main purposes when it comes to constructing a home. The first and most obvious one is for structural support. The frame of the home makes up its “bones,” providing stability and holding up all of the weight.

We use a method of framing today called “platform framing.” In this style of framing, a home is built floor by floor, with each story stacked on top of the other. Wall studs – the vertical columns which hold up the wall – are separated by floor rather than running the whole height of the house.

Think of platform framing as a building-block style of construction, with each floor as its own block.

The second purpose of a home’s framing is to provide the framework for the insulation. In order to protect its inhabitants from the outside elements, a house must maintain a weatherproof, temperature-controlled environment. We achieve this by insulating the exterior walls of the home so the outside temperature doesn’t affect the temperature inside.

We measure a wall’s insulation level using “R-value,” or resistance to heat change. The higher the R-value of a wall, the more insulated it is.

Why use advanced framing techniques?

Advanced framing uses less lumber to achieve the same structural integrity in a home. Because it requires more attention to detail and more time to plan, it usually costs more on the design end. However, in today’s lumber market, you’re still likely to save a few bucks on materials.

If you find a good builder who is familiar with advanced framing techniques, you’ll also probably save money on labor costs, since the process is more efficient.

In addition, advanced framing also optimizes the R-value of the home, so you’ll also save on your energy bills down the road.

As the saying goes, you have to know the rules before you can break them. First, let’s take the standard way to frame a home.

A double top plate consisting of two 2×6 boards stacked on top of one another holds the studs in place at the top.

If you have a second story, the floor joists of the 2nd floor rest on top of the top plate, and the pattern continues upward from there.

Where the wall meets the roof, the roofing trusses then sit on top of the highest wall’s top plate.

With advanced framing, the wall studs are spaced out by 24 inches instead of 16, meaning a wall will use fewer studs. It also makes room for more insulation between the studs.

Instead of a double-layer top plate, advanced framing employs a single-layer top plate that runs the entire length of the wall. A single top plate cannot have any joints and must be one continuous piece of wood, but it saves several hundred feet of lumber by not having a second layer.

The 24 in., single top plate method only provides proper structural support if every beam is aligned along the same vertical plane. This means that the floor joists, studs, and roof trusses must all stack on top of each other in one continuous line from top to bottom.

In contrast, standard framing does not require that any of these beams align, as double-layer top plates evenly distribute the weight down to the studs below.

Modern windows do not require the same kind of structural support that windows used to require. As a result, we can use advanced framing methods on windows, as well.

The sill plate, or the bottom sill of the window, is a horizontal beam that sits on top of the cripple studs, short studs used to support the sill.

On the outside edges of the sill, a pair of trimmer studs run up both sides of the window.

The trimmer studs provide support to the header, a horizontal support beam that spans the length of the window at the top. The header holds up additional cripple studs, which run from the header to the top plate.

The king studs are the outermost studs of a window frame and run from the bottom plate to the top plate, providing an exterior frame for the window supports. Usually, a sill cripple, trimmer stud, and king stud are placed directly next to one another.

Today, windows are secured to the home by edge flanges, which run along all four sides of the window and attach to the sill, trimmer studs, and header.

As a result, the load-bearing responsibility of the header is often little enough that a skilled builder can use a header hanger, a metal bracket that attaches the header directly to the king stud.

As a result, the header hanger eliminates the need for both trimmer studs, and the 24 on center framing technique means minimal cripple studs as well.

Note: The same basic concept applies to door openings, as well. The header over a door can be attached using header hangers instead of the standard trimmer stud.

Corners can be one of the trickiest parts of a framing project, especially because they must be incredibly strong, while also efficiently using space and materials.

Most standard, 90-degree wall corners use 3 or 4 studs, 2 or 3 studs inside one corner wall, and 1 stud perpendicular to them in the other wall. This provides ample support for the corner and an edge on which to hang drywall later.

The problem is that this method either uses a lot of lumber with a 4-stud corner or leaves an empty cavity between 2 studs in a 3-stud corner. This cavity can’t be filled with insulation, and thus reduces the efficiency of the house.

When using advanced framing techniques on corner construction, there are 3-stud and 2 stud options.

The three-stud option, often called a “California corner,” uses the same configuration as a standard 3-stud corner, except it flips the 2nd stud in the 2-stud wall by 90 degrees.

This provides access to the cavity between the 2 studs while still allowing for a drywall backing.

A 2-stud corner simply assigns each corner wall a single corner stud. The studs are configured in an “L” shape, and metal drywall anchors are used to provide a drywall backing.

How does advanced framing save you money?

Since they’re designed to be more efficient, advanced framing techniques have the potential to save you on your construction and power bills.

One thing to keep in mind when considering advanced framing is that wood conducts heat. It may not conduct heat well, but it does create a thermal bridge from the outside to the inside. So, the more studs you have in a wall, the less energy efficient your home will be.

Another way to think about it is that when you have fewer studs in a wall, you have more room for insulation, and more insulation means a higher R-value. As a result, the U.S. Department of Energy estimates that a home built with advanced framing can save up to 5% on annual energy costs.

The cost of lumber has stabilized at about 40% higher than their pre-pandemic rates, making advanced framing much more popular among builders. Now more than ever, homeowners are concerned about reducing material costs on home remodels and additions.

Thankfully, advanced framing uses up to 10% less lumber. And, because these methods simplify the task of framing a house, you can save 3-5% of your labor costs, too.

Is advanced framing right for your addition?

Saving costs on construction and on your monthly power bill sounds like a win-win. So what’s the catch? Well, you’ll just want to make sure that if you have somebody doing advanced framing on your home, they’re qualified to do so. Though more efficient than traditional framing, there is more room for error.

If you’re considering a home remodel and would like to learn more about saving lumber, labor, and electrical costs with advanced framing techniques, click the button below to schedule a call with one of our design consultants.