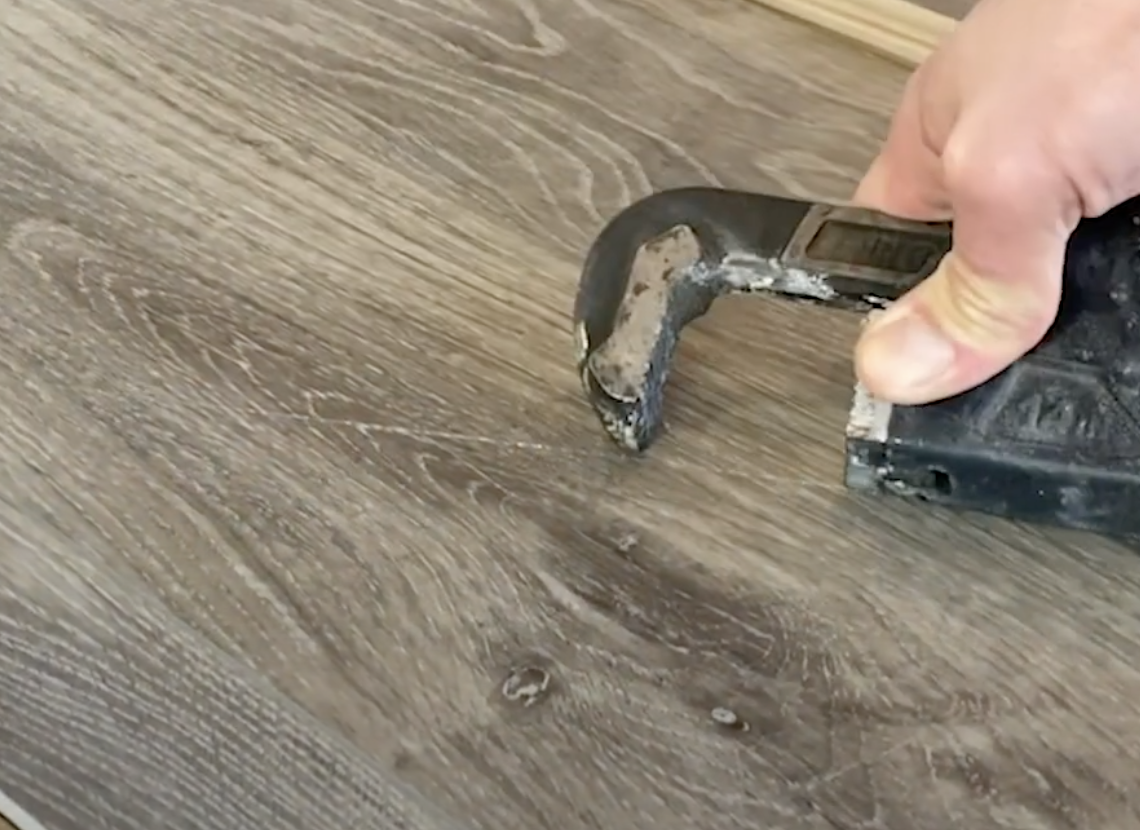 These days, flooring options come in a wide range of materials and styles. But it can be difficult to know which ones will stand up best. That’s why we put them to the test. From hardwoods to luxury vinyl plank to laminate, find out which is the most scratch resistant flooring.

If you have kids or pets, or simply have a heavily trafficked home, you probably know that your floors can suffer from wear and tear over time. And scratches are one of the most common ways floors can be damaged. So which flooring material is the most scratch resistant?

Using samples of maple hardwood, luxury vinyl plank, and laminate, we brought out the heavy tools to find out which one would stand up best to potential scratches.

In our first test, we employed a tool called a “cat’s paw.” It’s a carpenter’s tool that has a sharp, curved V-shaped cleft for gripping nail heads at one end. The edge isn’t super sharp, but it’s a good comparison to dragging a piece of furniture across the floor.

The result: We began with the maple. Even though this is a hardwood floor, the cat’s paw did scratch the surface and indent the wood. So dragging something moderately sharp did leave a scratch on maple hardwood.

The result: Next, we tested the same tool on the luxury vinyl plank by dragging it with similar pressure. It produced no visible scratching. The LVP successfully resisted any damage.

The result: Finally, we dragged the cat’s paw over the laminate flooring to see what, if any damage would happen. It produced a very faint scratch, but it was hard to see with the naked eye, so similar to the LVP, it resisted scratching very well in this case.

Next, we tried something a little heavier. We wanted to see if dropping a four-pound sledge hammer on the flooring samples would leave any marks.

The result: A bit to our surprise, in all cases the flooring held up well. The hammer didn’t leave a scratch on the hardwood, vinyl, or laminate.

For our third test, we brought out a pipe wrench. We wanted to give this a try because these wrenches have some pretty sharp edges on them, much sharper than the Cat’s Paw..

The result: When we dragged the wrench across the maple, the sharp edge of the wrench left a visible mark. It wasn’t deep, but it was definitely apparent.

The result: The wrench also did some damage to the LVP. It cut through the wood-like graphic on top of the sample and also left a bit of an indentation.

The result: The laminate also showed some damage from the pipe wrench, but it wasn’t extensive. That said, the wrench did leave a fairly visible scratch on the surface.

Finally, we wanted to use something both sharp and heavy, namely a huge rock. Chances are, you may not drag or drop a giant rock on your kitchen floor, for example, but like the other tools, it can mimic the movement of furniture, like a dining table, being dragged across flooring. Let’s see which material proved to be the most scratch resistant flooring in our last test.

The hardwood did not fare so well at all against the rock. It left a very noticeable gash across the surface and an impression in the wood.

The vinyl fared better than the hardwood, but it still sustained some damage. The rock left a significant scratch and an impression on the surface due its weight.

As for the laminate, the rock barely left a mark. We ran it over the sample a couple of times to make we got a sharp edge on it, and the result was a barely visible scratch, It fared much better than the hardwood and the vinyl.

So, what do our scratch tests reveal, apart from actual scratches on our flooring samples?

Even though our first material was a maple, which is a very hard wood, it still suffered some really noticeable damage in each of our tests. In fact, it was the least scratch resistant of all three flooring samples in our experiment.

The material that really shined in all of our tests was the laminate. With nearly every tool we threw at it — the Cat’s Paw, sledge hammer, and even the giant rock — the laminate barely showed a scratch. The only one that left a significant mark was the pipe wrench and its sharp edges.

So, if you’re thinking about installing some new flooring in your home and want something that will avoid the most scratches, laminate may be your best bet.

Looking for more flooring related information or general design ideas? Check out some of our other blog posts!