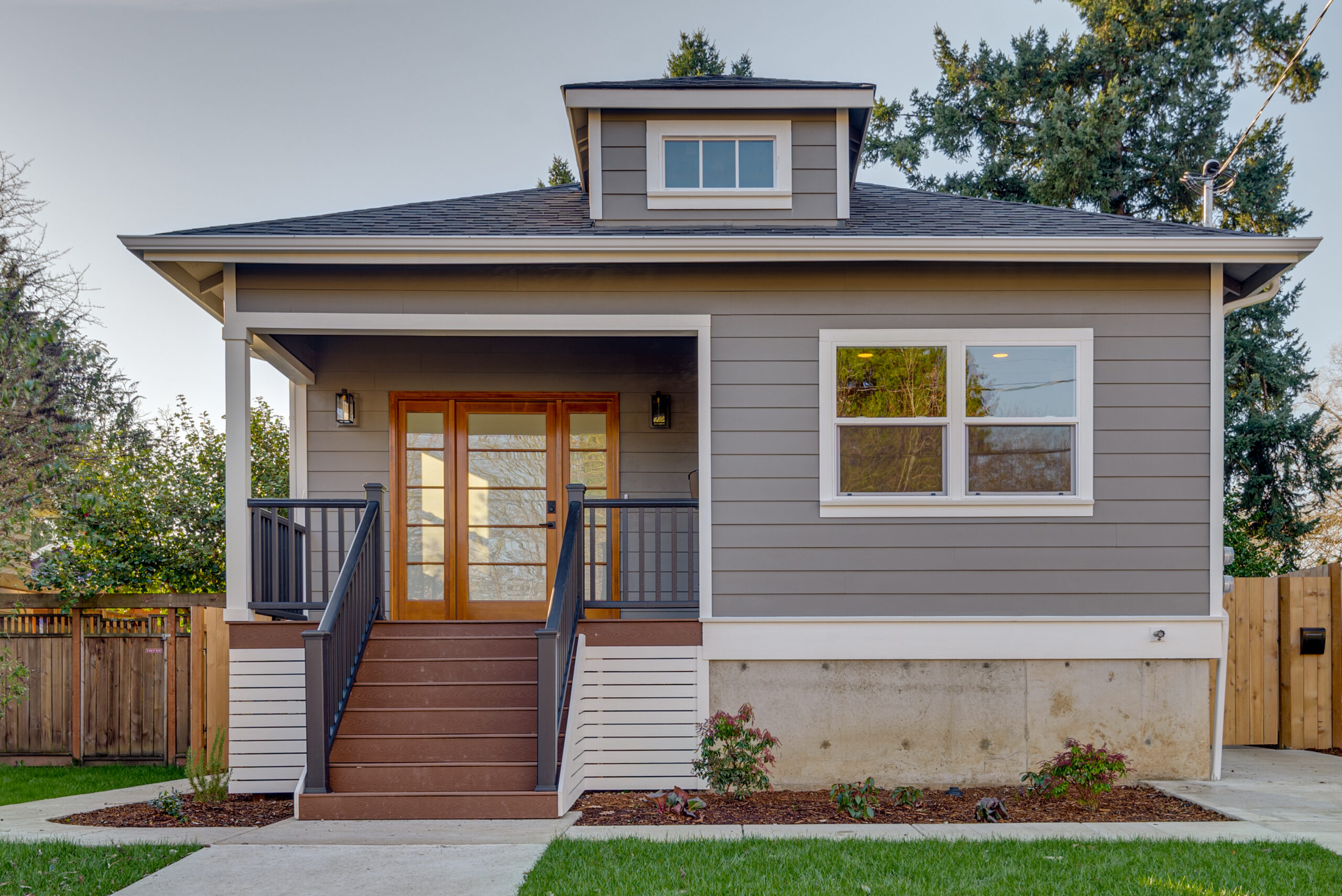 There is something special about the character of old homes – they are lasting testaments to the artistry and craftsmanship of years long gone by. Fortunately for our fellow historic house enthusiasts, there are a lot of old homes here in Portland, and many are in need of remodeling.

That’s not to say that older homes don’t also come with their own set of challenges. Having remodeled our fair share of houses from the early 1900s, we at Lamont Bros know first-hand what to expect when walking into a piece of history.

So, if you own an older home and are considering a remodel, this article will help you prepare for the challenges ahead. Remodeling old Portland homes can be difficult, and that’s no secret. But if you know what to expect going into it, you’ll end up with a home that is both comfortable and safe to live in.

Below, you can expect to learn about:

Before we dive into talking about remodeling, let’s take a trip down memory lane to look at the historical significance of old homes here in the Portland area.

116 years ago, the City of Portland hosted the Lewis and Clark Centennial Exposition. At the time, the expo cost $1.4 million, which is the equivalent of over $42 million today. Over its 4 month run, the fair saw over 1.6 million people in attendance. Featuring exhibits from 21 countries and 16 US states (out of 45 at the time), the exposition was one of the most historically significant events in the development of Oregon State.

As a result of the expo, the population of Portland exploded, rising from 90k in 1900 to 258k in 1920. It was the largest increase in population over 20 years that the city has ever seen.

Of course, an increase in population also means a massive housing boom. That’s exactly what happened from 1905 to 1912 on Portland’s east side, permanently shifting the population’s geographical center to the east bank of the Willamette.

Today, most of the historic homes we remodel in the Portland area were built between 1900 and 1920. Homes from this era had early 20th-century plumbing and electrical features. They also used early, unrefined versions of many modern building techniques we use today.

The most popular were craftsman-style homes, square floor plans, and hundreds of kit homes. During the early 1900s, department stores like Sears offered pre-designed kit homes, an estimated 70% of which still stand today.

A common trend we see today in these types of homes is that most have been renovated at least once in the last hundred years. The problem is, we never know what exactly lies inside of a wall until we open it up.

Thus, remodeling old Portland homes can be a bit of a gamble. Sometimes, it is important to address the safety and structure of the home before remodeling for any creature comforts. Other times, those issues have already been solved (or exacerbated) by a previous remodel project.

What to watch out for when remodeling old homes

From the ground level all the way to the peak of the roof, old homes can be full of surprises. Even homes built to last still need regular maintenance and updates. Fortunately, remodeling presents the perfect opportunity to give some old Portland homes the attention they deserve.

At Lamont Bros., we consider an “old home” one built before or around 1920. Barring a few admissible advancements in construction technology, most homes built since 1920 are more or less the same.

In the early 1900s, the science of concrete was not broadly understood. Because of this, the foundations of homes built during that time are not consistent in terms of strength or longevity. Many foundations from this era lack the proper structural stability, either due to high levels of silt in the sand, the wrong type of aggregate, or improper water ratios.

A compromised foundation is a serious problem, especially for an active seismic zone like the Pacific Northwest.

The good news is that bad foundation conditions are easy to detect. Oftentimes, the concrete will be brittle enough that it will crumble away with a gentle scrape from a hard tool. The bad news is that solving this issue is not easy or cheap.

The options for fixing a compromised foundation are to either reinforce or replace it. Which one you go with will come down to exactly how compromised the foundation is.

Reinforcing a foundation may involve anything from screwing massive steel plates over cracks in the wall to building a wood-framed foundation wall inside of the old one. Foundation repair work is inherently custom by nature, and any custom construction work is expensive. Expect for foundation reinforcement to cost anywhere from $10-30k.

If you replace your foundation, that requires a subcontractor to raise your home on jacks, demolish the old foundation, and pour an entirely new foundation. Many homeowners who choose to do this will also opt to add a basement if they didn’t already have one.

This kind of foundation will cost a minimum of $150k, depending on the home’s size, accessibility, and condition of the existing foundation.

Homes built between the mid 19th and early 20th century used a method of framing known as “balloon framing.” It was a transitional technique between timber framing ways of yore and the platform framing practices of today.

Balloon framing became popular in the 19th century as a method of framing that required very little skilled carpentry, as opposed to timber framing, which required extensive knowledge of advanced joinery.

Current platform framing builds floor by floor, so the floor joists of each floor separate studs of each separate level. Think of it as a “building block” approach to framing. Each floor is like a block stacked on top of the one below.

Balloon framing used wall studs that ran the entire height of a house’s wall, from foundation to roof, with the floor joists supported by a beam attached to the side of the studs. So, a 2 story home required 25-30 foot stud boards.

Balloon-framed houses tend to be less structurally stable because of uneven weight distribution. This can cause floors – especially 2nd and 3rd story levels – to sag.

Also, because the studs run the entire height of the wall, so does the cavity between them. In this case, an open cavity from the basement up to the attic means more air currents and less energy efficiency. It’s also more conducive to home fires, as no partition exists to stop flames from spreading from one floor to the next.

While balloon framing does not pose as immediate of a threat to your home, it is something to consider while remodeling. If you tear your walls open while remodeling your old home, you might as well take the time to address the structural issues within a balloon-framed home while the studs are exposed.

Inspectors in Portland may also be somewhat strict on structural issues while remodeling old homes. Many will require that we add additional partitions within the stud bays, called fire blocking. Worst case scenario, we completely re-frame some of the home’s upper levels using platform methods.

As you might have guessed, this presents several hazards. The lack of a grounding circuit means a greater risk of electric shock.

Because of their age and more frequent exposure to the elements, the wires are prone to short circuit malfunction if anything crosses between them, including water, insulation, or vermin.

Today, hot, neutral, and ground wire are all run together in the same conduit, commonly called romex, greatly reducing the risk of short circuits and electric shock.

Additionally, knob and tube wiring can’t handle the power needs of the modern American. Our energy consumption per capita has grown over 50% since 1920.  As you can imagine, running modern appliances like TVs, microwaves, and gaming consoles on a knob and tube system is a great way to overload the circuit, damage your appliances, or cause an electrical fire.

While a properly maintained knob and tube system is not inherently dangerous, you should usually replace it. Unfortunately, this usually requires a full rewiring of a home, and electricians aren’t especially cheap these days.

Early 20th-century plumbing wasn’t quite down to an exact science during the Portland housing boom. One of the most common issues with the plumbing of the era is in the sewer lines.

Sewer drainage lines from homes in the early 1900s still have clay pipes. Prone to blockage and breakage by tree and plant roots, you should also replace these pipes before they cause a sewage leak on your property.

Water supply lines, on the other hand, were usually made from galvanized steel, which wasn’t much better. The issue with galvanized steel pipes is that mineral buildup restricts the flow of water, resulting in low water pressure to the home.  You’ll probably want to replace these, too.

Another thing to consider when remodeling an old home in Portland is whether or not the home contains any hazardous materials. Specifically, we frequently encounter old houses with high levels of asbestos and lead.

Asbestos is a naturally occurring, fibrous material that offers excellent insulation and heat-resistant properties. Unfortunately, after decades of using it in both residential and commercial construction, we discovered that asbestos is also very dangerous.

When inhaled, the microscopic fibers of the asbestos lodge in the lungs. Prolonged exposure can result in severe respiratory illness, including cancer.

In residential spaces, asbestos is most commonly found in linoleum floor tiles and flooring adhesive. It may also be present in some forms of wall plaster and drywall; 20-30% of the homes we’ve worked on have had this issue.

Lead paint is or was at one point present in just about every home built before 1970. The presence of lead paint isn’t dangerous in and of itself, but it can be very toxic if inhaled or ingested. Lead poisoning is especially hazardous to young children and can have severe neurological effects if left untreated.

As a general rule of thumb, lead paint that is not chipping or peeling poses very little health risk. However, most remodel projects involve cutting into walls or re-painting the interior. If existing lead paint is disturbed in any way, it immediately becomes a health risk. Dust created from sawing through lead paint is especially toxic because it puts lead particles in the air.

In our professional experience, you should never try to handle hazardous materials yourself.

In some Portland residential districts, such as Irvington, there are laws in place to preserve historic architecture. Homes within these districts must be remodeled according to strict standards. Before remodeling your old home, enter your address in this district mapping tool to check to see if you live in one of these historic Portland districts.

Now that you know what kind of things to expect from remodeling old homes in Portland, are you up to the challenge? If you’re thinking about a remodel for an old home, several of our design consultants at Lamont Bros are historic house enthusiasts; some of us even live in them! Check out some of the work we did on this historic Portland mansion.

Click the button below to schedule a call with a design consultant. We’ll help guide you through the process of remodeling, from drafting designs all the way to the construction finish line.